Guardian – Shafilea Ahmed and tough lessons to be learned

Carter’s report on Shafilea Ahmed‘s death (Parents jailed for life, 4 August) highlights a tragedy for the communities and her siblings but it also raises broader complex issues for society as well. Carter is right in her observation about cultures in collision. In the late 1990s we published a series of studies on rates of self-harm across communities. These studies showed rates of self-harm in south Asian women aged 18-24 were three times higher than their British counterparts. They were more likely to attempt self-harm as a result of domestic violence, alcohol abuse and cultural conflict. This is the vulnerable age when individuals start to assert their identity and move away from home and individuate.

Prior to writing the reports we presented these findings to members of south Asian communities, largely women in public meetings in south and west London. Women and men who attended responded by saying that they knew this was going on and urged us to educate parents, peers and the wider community about the causes. We produced educational leaflets which in a follow-up study revealed that the knowledge about self-harm and potential sources of help had gone up.

Education about cultural values and the role that cultural assimilation can play is critical if future tragedies such as this are to be avoided.
Dinesh Bhugra
Professor of mental health and cultural diversity, King’s College London

See the original article on the Guardian site

Dinesh Bhugra, professor of mental health at the Institute of Psychiatry and former president of the Royal College of Psychiatrists, says: “Every time I see a new patient I do a child risk assessment, and it is right to do so. My experience is that in this country we are becoming more risk averse.”

See the full article on the Guardian site

‘We will be left with a dangerous vacuum of help,’ warns president of Royal College of Psychiatrists.

A leading psychiatrist has warned of the ‘massive problem’ of depleting numbers of mental health doctors.

Professor Dinesh Bhugra, the outgoing president of the Royal College of Psychiatrists, said not enough British doctors were training as psychiatrists while visa restrictions meant foreign doctors could no longer fill the gap.

He said 14 per cent of consultants posts in the UK were either unfilled or filled by a locum. An additional 209 consultants intended to retire or resign soon.

‘This is a huge, a massive problem,’ Prof Bhugra told the Guardian.

‘We will be left with a dangerous vacuum of help for people with mental health disorders or will be forced to get special dispensation from the Government to recruit heavily from countries who can ill afford to lose their mental health professionals.

Mental health services are dangerously understaffed and overcrowded, the outgoing president of the Royal College of Psychiatrists has said.

Professor Dinesh Bhugra said that failing psychiatric wards were discharging sick people back into society who remained a risk to themselves and to others.

He warned that there was a “huge, massive problem” of depleting numbers of mental health doctors in the UK because not enough British medics were choosing to train as psychiatrists and visa restrictions meant that foreign doctors could no longer fill the gap.

A survey by the royal college found that 14 per cent of consultants’ posts in the UK were either unfilled or filled by a locum, and an additional 209 consultants intended to retire or resign soon.

In an interview, Prof Bhugra said: “We will be left with a dangerous vacuum of help for people with mental health disorders or will be forced to get special dispensation from the government to recruit heavily from countries who can ill afford to lose their mental health professionals.

“Society will be overwhelmed by the demand of those in need if government doesn’t act now.” 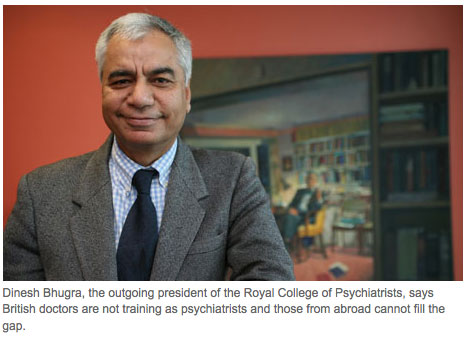 Overcrowded and understaffed psychiatric wards are leaving patients fearful for their safety and unable to make proper recoveries, according to a damning assessment of Britain’s mental health service by its lead professional body.

Read the full article on the Guardian site

The Observer – The mental health units that shame the NHS

Millions have been spent on the NHS since Labour pledged to reform it 10 years ago – so why does the incoming president of the Royal College of Psychiatrists think the state of some wards is so dire that he would not let his own family use them? Social affairs correspondent Amelia Hill reports
‘You don’t go to hospital to get hurt, but that’s what’s happening in our acute psychiatric wards,’ said professor Dinesh Bhugra. ‘Some are uninhabitable. It’s completely and absolutely unacceptable.’ Bhugra, who will not only be the first Asian president of the college when he begins his term of office on Wednesday, but also the first president to be elected unopposed since it was founded in 1841, added: ‘Wards are not safe. And I predict things will continue to get worse.’

Many have shown symptoms of anxiety and depression such as sleep disturbance, a sense of hopelessness, lack of appetite and tearfulness. Professor Dinesh Bhugra, Dean of the Royal College of Psychiatrists, and one of the authors of the study, said: “These findings are extremely worrying. We have discovered that a normally robust and highly-committed group of professionals is feeling very demoralised.

“The Government has a moral obligation to ensure that the next generation of doctors does not feel disenchanted with their profession.

“We would suggest that all trainees in posts in the UK are assured of the jobs as soon as practically possible so that the level of uncertainty and anxiety can be reduced.”

Guardian – The struggle for ‘cultural competence’

The mental health care that people from black and minority ethnic communities receive is a ‘disgrace’, according to a seminal inquiry report. But is race equality training really the answer?

The government’s five-year action plan, Delivering Race Equality in Mental Health Care, calls for more responsive services “delivered by a more culturally capable workforce” and for training in “cultural sensitivity” for all those involved in planning or delivering services. But some mental health professionals question how much such training will improve care. “I think we’re in danger of concluding that only minority ethnic communities have a culture,” says Dinesh Bhugra, professor of mental health and cultural diversity at the Institute of Psychiatry, King’s College, London. “But culture in Camberwell is quite different from [that in] Islington.”

Bhugra, who is dean of the Royal College of Psychiatrists and has carried out research in cross-cultural psychiatry, runs courses for medical students and trainee psychiatrists in cultural awareness. But he stresses that service patterns also need to be considered. “Good clinical care means we must be fully aware of the norms in the populations we serve,” he says. “But that, on its own, will not overcome the problems many people have in accessing services in their present form.”

Services need to be planned in ways that make it easier for people to access them. “Emotional access can be a big barrier,” Bhugra warns. “Our research among Punjabi women in Southall [west London] showed they wanted help to overcome depression, but the stigma of the illness made it difficult for them to seek support. It would be far easier if we took our services to temples and mosques.”

Read the whole article on the Guardian site